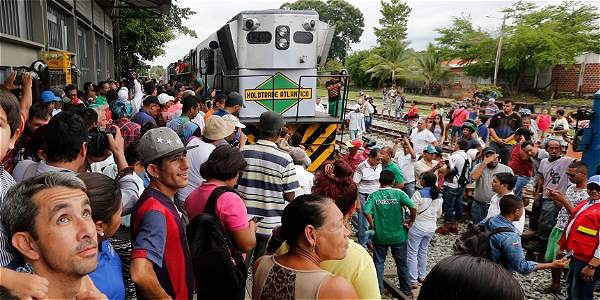 La Dorada (Caldas), 20 October 2016 – The first test run was successfully completed along the 767 km of the Chiriguaná-La Dorada railway line by a train pulling a 360-tonne cargo of containers.

The test run, which took 4 days to complete, was greeted with great excitement by the inhabitants of the towns along the route which traverses the departments of Magdalena, Cesar, Santander, Antioquia and Caldas. Luis Fernando Andrade, President of the National Infrastructure Agency (ANI), affirmed that ‘the train achieved its objective of testing the condition of the line with a view to future freight and passenger operations, in particular on the section between Chiriguaná and La Dorada, where the National Government, through the ANI, has invested in the rehabilitation of the line, and where no loaded train had been able to pass for more than16 years’.

The contract for the rehabilitation work on the line between Chiriguaná and La Dorada was awarded to the Temporary Central Railway Union, of which RUBAU is a member, at the end of 2013. Today, as a result of the work undertaken, the revival of Colombia’s railway network is becoming an ever-greater reality for an ever-larger part of the country’s population.

The following link will take you to a video of the train during the test run on the stretch of line between Puerto de Santa María and La Dorada.